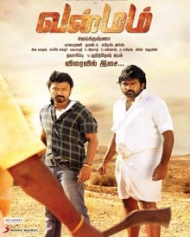 Vanmam is an action - romantic Tamil movie directed by Jai Krishna, a former assistant of Kamal Haasan. Movie features Vijay Sethupathi, Kreshna and Sunaina in the lead roles. The film will have music scored by S. Thaman and cinematography by Balabharani.
Story Line
The film is a rural tale about the life of two friends, played by Sethupathi and Kreshna. They are jobless, carefree but the happiest. Sunaina plays the love interest of Kreshna who repeatedly pleads him to have some seriousness in life. Sunaina first accepts Kreshna as her soulmate but departs after her brother comes to know about their relationship.
In a cinematic twist, Vijay Sethupathi accidentally kills Madhusudhan Rao which leads to a disagreement between him and Kreshna that breaks their friendship and they choose to take their respective paths. Vijay Sethupathi realizes his mistake and chooses to help Madhusudhan Rao's family by not revealing them of his connection with Madhusudhan. On the other hand, Kreshna falls prey to Jaypee, who once had a fierce rival with Madhusudhan when he was alive.
Then friendship between Vijay Sethupathy-Kreshna, the romance cum advice sessions between Kreshna-Sunaina, and a fitting duel between Sunaina’s brother Madhusudhan Rao and his business rival is rest of the story to be watced in big screen.
Production
In August 2013, it was confirmed that Vijay Sethupathi would be doing a film with Kreshna titled Vanmam which means "vengeance". Filming began in late April 2014 in Nagercoil and was shot in and around Kanyakumari district for about 37 days, during which 60% of the filming had been completed. Vijay Sethupathi joined the cast from the second schedule onward. The final schedule began on 15 June 2014 and ended on 10 July 2014. The action sequences were canned during the final schedule of the film. The shooting was wrapped up 3 days earlier on 7 July 2014.