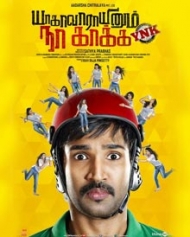 Yagavarayinum Naa Kaakka (aka) Yagavarayinum Naa Kakka is a Tamil movie directed by Sathya Prabhas Pinisetty starring his brother Aadhi and Nikki Galrani. It is a bilingual film shot in both Tamil and Telugu.
Pasupathy, Richa Pallod and Mithun Chakraborty in his first appearance in a south Indian language film, play supporting roles.
Story
Yagavarayinum Naa Kaakka is based on a real incident happened in Chennai. It is the story of a happy go lucky man and the shocking incident that turns his life upside down and his search for Mumbai based underworld don Mudaliar.
One night of madness by these friends lead to troubles. What happens next? To be watched on big screen.