At the recently concluded 62nd Britannia Filmfare Awards (South), films like Kaththi and Madras walked away with most number of honours.

Surprisingly, Kaaviya Thalaivan which had the highest number of nominations for Tamil failed to convert even one such nomination into an award.

While Kaththi bagged 3 awards including Best Film, Best Director(AR Murugadoss) and Best Choreography(Shobi) for the song 'Selfie Pulla', Madras surpassed it as it won 4 awards.

Winning the Best Supporting Actor (Female), which went to Ritwika, the Karthi starrer also won the Best Playback Singer - Male(Pradeep Kumar) for the song 'Aagayam Theepidicha'. Karthi went on to win the Critics Best Actor Award even as Catherine Tresa was honoured with the Best Debut (Female) Award.

Best Actor (Male) was bagged by Dhanush for his portrayal of an unemployed youth in Velayilla Pattathari and Anirudh won the Best Music Director Award for the same film.

As expected, Na Muthukumar won the Best Lyrics for the song Azhagu in Saivam and Uthara Unnikrishnan won the Best Playback Singer - Female for the same song.

The only award for Jigarthanda came in the form of Bobby Simha who won the Best Supporting Actor. Likewise Cuckoo's lone award came through Malavika Nair as she won the Best Actor (Female) Award.

Dulquer Salman was presented with his Best Debut Award for his work in Balaji Mohan's Vaayai Moodi Pesavum and the biggest award of the night, the Lifetime Achievement Award was given away to director IV Sasi and Radhika Sarathkumar. 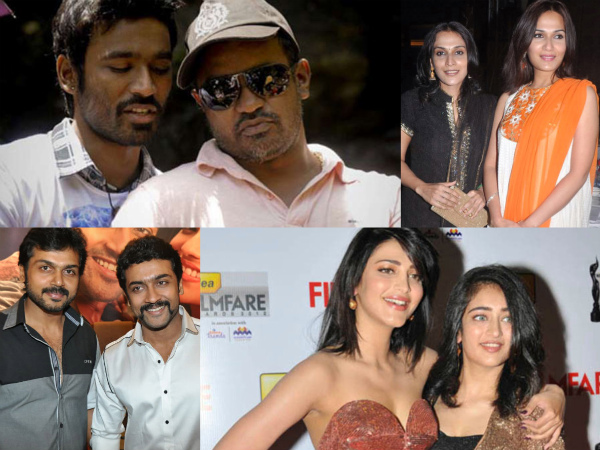 Cool Siblings Of Kollywood Who Might Rule The Industry In The Future!