Indian 2, the highly anticipated project will mark the second collaboration of Kamal Haasan and filmmaker Shankar. The shooting of the big-budget venture is currently put on hold due to the coronavirus threat and lockdown. As per the latest reports, Kamal Haasan and Shankar are now planning to wrap up Indian 2 by January 2021.

As reported earlier, leading man Kamal Haasan is planning to wrap up all his professional commitments by the first quarter of 2021, to concentrate on the upcoming Tamil Nadu assembly elections. So, the actor has requested the banner Lyca Productions and director Shankar to resume the shooting of the project as soon as possible.

In that case, Kamal Haasan and Shankar might resume the shooting of Indian 2, mostly by the end of September 2020. The actor is also planning to simultaneously shoot for the highly publicized show Bigg Boss Tamil Season 4, from October. In that case, Kamal Hasaan might have a very busy schedule ahead for the last quarter of 2020.

According to the sources to Indian 2, about 60 percent shooting of the Kamal Haasan starrer is already finished. If the reports are to be believed, the makers are planning to release the Shankar directorial by the second half of 2021, if the novel coronavirus pandemic comes under the control and world comes back to normalcy.

Kamal Hasan will once again play the much-loved character Senapathi in Indian 2, which is a sequel to the blockbuster movie Indian. Kajal Aggarwal and Rakul Preet Singh appear as the female leads in the movie, which features popular Siddharth in a pivotal role. Anirudh Ravichander has composed the songs and background score, thus marking his first collaboration with both Kamal Haasan and director Shankar.

Bigg Boss Tamil 4: Kamal Haasan Wins The Internet With His Graceful Moves In The New Promo! 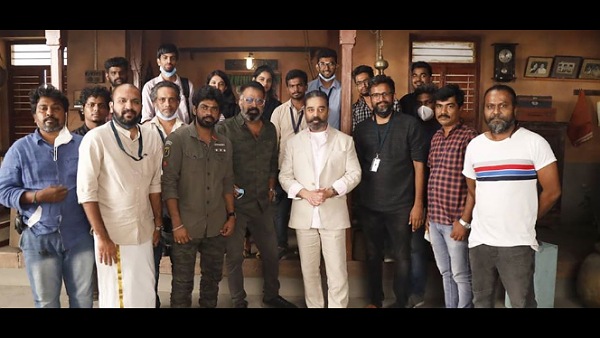