The Bigg Boss 15 Weekend Ka War episode of December 18 witnessed the high-voltage drama. Salman Khan, the host lashed out at Ritesh for mistreating his wife Rakhi Sawant. He even went on to ask Rakhi to let go of Ritesh. Meanwhile, Devoleena Bhattacharjee was put in the Bigg Boss 15 jail.

At the beginning of the episode, Devoleena Bhattacharjee was seen entering the jail. Later, the Weekend Ka War began with host Salman Khan's grand entry. The superstar was seen schooling Ritesh for disrespecting and mistreating his wife Rakhi Sawant. Salman added that he doesn't even want to imagine how he must be treating Rakhi at their house if he is disrespecting her on national television.

Rakhi Sawant finally opened up about her plight and revealed that she feels hurt when Ritesh disrespects her. Salman Khan, who was enraged, asked Ritesh why he is treating his wife disrespectfully, even after Farah Khan warned him. The host asked Rakhi to call him if he mistreats her again.

The Bigg Boss 15 contestant revealed that her husband has always mistreated her, and threatened to divorce her. Rakhi added that she wanted to protect her family and remained silent because of that. Salman Khan then asked to never compromise on such things and let go of her husband. He once again warned Ritesh to never repeat his behaviour. 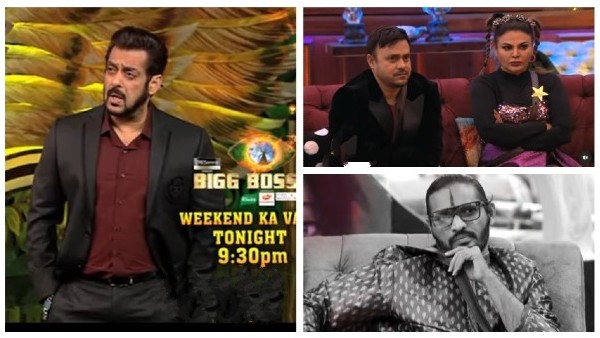 Bigg Boss 15: Gauahar Khan Heaps Praise On Rajiv Adatia; Says 'He Is Very Entertaining And He Has A Voice'

Later, Salman Khan played the clips of Abhijit Bichukale's behaviour inside the Bigg Boss 15 house, including the clip where he was seen asking Devoleena for a kiss. When he asked how the inmates felt about it, all of them replied that it was inappropriate. Salman agreed with them but criticised Devoleena for not setting her boundaries with him from the beginning. But Tejasswi Prakash argued with the host, stating that a woman might need time to process.

However, Salman Khan stated that both were wrong as Abhijit crossed the line and Devoleena didn't take a stand for herself. The host also criticised Tejasswi for always dragging issues. Later, Govinda and Remo D'Souza were seen entering the Bigg Boss 15 house. Salman then wrapped up the episode, by conforming that the eviction will take place on Sunday episode.