Thunder and lightning were all over the COLORS' Bigg Boss 15 house as the housemates gather around to see what's happening. Three shadowy figures emerged from the smoke; they're none other than the new 'Wild Card' entries of the house, Rashami Desai, Devoleena Bhattacharjee, and Rakhi Sawant! Their arrival left everyone shocked as they try to fathom this spectacular twist.

Later, Ritesh is seen interacting with the Bigg Boss 15 housemates, who were totally excited to meet him. He narrated their love story to the fellow contestants, and revealed that they started chatting on WhatsApp and fell in love. 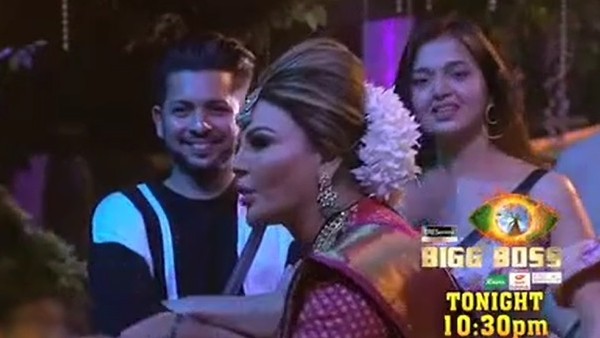 Bigg Boss 15: Rakhi Sawant Is Scared Girls Would Fall For Her Husband As He Is Good Looking

Afsana Khan Claims She Got Panic Attacks Because Of BB 15 Makers; Says 'I'm Not Like This In My Normal Life'

Meanwhile, Rajiv Adatia and Nishant Bhat got into a war of words, as the former played a prank on the latter. Nishant lashed out at Rajiv, and this led to a massive clash. Later, Rashami Desai was seen telling Tejasswi Prakash that her mother is concerned about her relationship with Karan Kundrra. Rashami added that she is liking Tejasswi's game, but is unhappy with Karan. Shamita Shetty, on the other hand, was seen telling that she feels lost and trapped inside the Bigg Boss 15 house.

To catch these fun moments, watch 'BIGG BOSS 15' presented by TRESemmé, powered by Knorr and Dabur Dantrakshak, beauty partner 'Lotus White Glow' and nutrition partner 'Nourish' every Monday to Friday at 10.30 pm and Saturday-Sunday at 9.30 pm, only on COLORS!