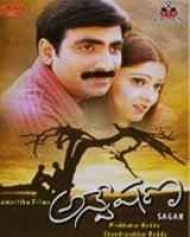 Horror
Release Date : 27 Dec 2002
Cast : Ravi Teja, Radhika Varma
Director : Sagar
Synopsis
Anweshana  is an Horror movie. In which, The film starts with a person called Prabhakar crushing himself to death by walking on to a speeding train. He was influenced by some mysterious person's black magic. As everybody thought that it was a suicide, Vamsy (Ravi Teja) - brother of Prabhakar - believes that it's a planned murder.

Vamsy is in love with his nagging girl friend Bhavana (Radhika Varma). Bhavana is another victim of occult sciences and she gets fits occasionally when she is sleeping. The priest tells Bhavana's mother that Bhavana is under going trauma created by Black Magic and the solution for this is to get her married to any guy with a matching birth chart.


The rest of the story is all about how they Solve that problem.