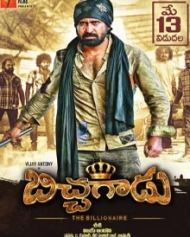 Vijay Antony and Satna Titus are playing the main lead roles along with Bagavathi Perumal and Dheepa Ramanujam in supporting roles.

Bichagadu is a story of a rich man who will be forced to become a beggar due to some circumstances. The role of the rich man is played by Vijay Antony. Satna Titus played the female lead role in this action thriller movie.

Apart from the lead roles, the movie has John Kennedy and Bagavathi Perumal in supportive roles. What made the rich man leave his pleasures and start begging and how did the...