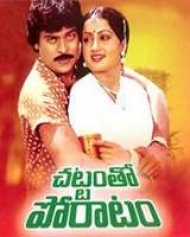 U | Action Drama
Release Date : 11 Jan 1985
Cast : Chiranjeevi, Madhavi
Director : Bapayya K
Synopsis
Chattam Tho Poratam is action crime based movie in which, Ravi (Chiranjeevi), who is the son of a struggling middle class farmer Dharmarao. He loves his cousin kalyani very much, but his another cousin Bujji is also after her.
Bujji tries every possible method to marry kalyani. Bujji’s father LokeswarRao plans and succeeds in fixing marriage between his son and kalyani.
In the due process Dharmarao is killed and ravi is trapped into this murder case. Ravi is arrested and produced in court. Due to lack of evidence, supporting him, Ravi is sentenced to death. Things take an interesting turn as,Bharathi, a law student offers to marry Ravi who files a mercy petition to the president on his behalf.
Bharati appeals to be with her husband till she gets a child....