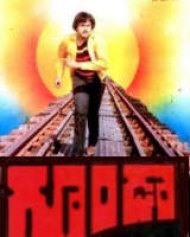 Action
Release Date : 23 Feb 1984
Cast : Chiranjeevi, Radha
Director : Kodandarami Reddy
Synopsis
Goonda is action oriented movie in which, Crime king Kalidas (Chiranjeevi), one fine day, Kalidas tries to running away in his Jeep with his god father, and unexpectedly their jeep meets with an accident.
After accident, a tranformed kalidas decides to live as a normal man under the new name of Raja.
He meets his father ananda rao and his family. His childhood friend and neighbour Jaya (radha) comes back into his new found life.
Anandrao attempts to stop the rice smuggling by Dharmayya and Kailasam. They both trap Raja into a case and Raja goes to jail.
Later, when raja learns that dharmayya and kailasam are planning big,he escapes from jail and saves a train from being Bombed by Dharmaraja and kailasam, and in the end again surrenders himself to the police.