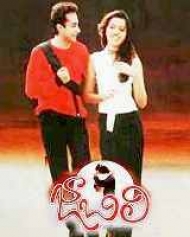 Romance
Release Date : 29 Nov 2001
Cast : Dileep, Rekha Vedavyas
Director : Sv Krishna Reddy
Synopsis
Jabili is a romantic movie in which, Hemant (Dileep) and Lavanya (Rekha) are childhood friends who are studying their degree now. The parents of Hemanth and Rekha are also very good friends since their childhood.

Hemant's father is a rich business magnate and the father of Lavanya is a middle-class guy. Hemanth's father is very particular about money and he gives more priority to money compared to friendship.

The inevitable thing happens. Hemanth and Lavanya are in love. Hemanth father wants Hemant to marry a girl who belongs to a family, which is equally rich. Lavanya father knows the preferences of Hemanth's father. Hence, he asks his daughter to cut the relationship with Hemanth.


The rest of the film revolves around how the love couple makes...