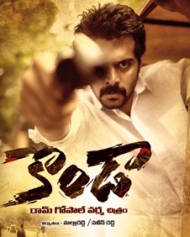 Konda is an action drama movie directed by Ram Gopal Varma. The movie casts Thirugan and Irra Mor are in the lead roles along with LB Sriram, Tulasi, Prudhvi Raj, Prashant Karthi, Abhilash Chaudary, and many others are seen in supporting roles. The music was composed by DSR while cinematography is done by Malharbhatt Joshi and is edited by Manish Thakur. The film is produced by A Company Production banner.
Story
A revolutionary and modernist, Konda Murali (Trigun) is a student at Lal Bahadur College, Warangal. Murali is fascinated by the sentiments of RK alias Ramakrishna, who is already playing an influential role in the Naxalite movement. He falls in love with Surekha (Ira More) who is studying in the same college at first sight. However, he turns on Nalla Sudhakar (Prithvi), a politician who is conspiring against him politically.
What has Konda Murali got to do with the Naxalite movement? Why the controversy with Nalla Sudhakar? How did Konda Murali confront the Nalla Sudhakar and the police who tried to assassinate him? Konda Surekha's eloquence in her political career. Konda film is the answer to the question of what tactics she has followed against her political opponents.
Release Date
Konda movie was released in theaters on June 23rd, 2022.