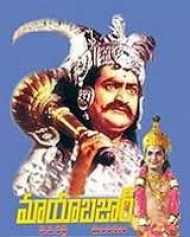 Drama
Release Date : 27 Mar 1957
Cast : N.T.Rama Rao, Nageshwara Rao Akkineni
Director : Kadri Venkata Reddy
Synopsis
Mayabazar is drama based movie in which, During the Pandavas Agnyatavasa (period of exile), Arjuna sends his wife Subhadra and their son Abhimanyu to Dwaraka to stay with her brothers, Krishna (N.T.Rama Rao)and Balarama (Gummadi Venkateswara Rao).
Sasirekha (Savitri), Balarama's daughter and Abhimanyu have been in love with each other from their childhood. Their families had agreed to get them married when they were children.
However, Balarama's wife refuses to honour that commitment as the Pandavas no longer have their kingdoms and are in exile.
Balarama decides to conduct Sasirekha's marriage with Lakshmana Kumara (Relangi Venkata Ramaiah) who is his favourite disciple, Duryodhana's (Mukkamala) son. Krishna advises Subhadra to approach (Ghatotkacha) (S.V.Ranga Rao)....