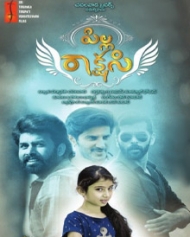 Baby Sara, Sunny Wayne, Aju Varghese are palying the main lead roles along with Dulquer Salmaan seen in a cameo.

The story of Pilla Rakshasi revolves around a vibrant and jovial kid Sara Arjun. Things take a turn when she witnesses certain events that happen in her school, which leaves her disturbed. It is then that Sunny Wayne  enters the scene and the rest of the happenings form Sara Arjun.