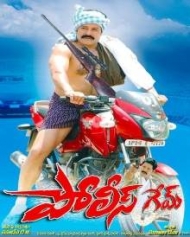 Action Drama
Release Date : 20 Sep 2013
Cast : Srihari, Neenu Karthika
Director : Sadha
Synopsis
Police Game is a story of a honest cop in the city, who takes charage on drug mafia head and cleans the city, especially the students who are involving in the drugs. Srihari playing the lead role along with Neenu Karthika in the female lead.