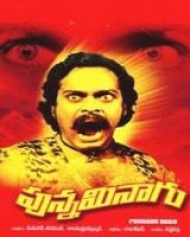 U | Drama
Release Date : 13 Jun 1980
Cast : Chiranjeevi, Madhavi
Director : Rajasekar
Synopsis
Punnami Naagu is drama based movie in which, Chiranjeevi played the role of a snake charmer Naagulu in this movie. He falls in love with menaka, whose adopted brother Narasimharaju is in love with naagulu’s cousin Laxmi(Rati).

Naagulu’s father feeds him with poisoned food since childhood and this makes him resitant to any snake bite.
Every fullmoon night, Naagulu behaves like a cobra and searches for a woman and every woman he meets, dies due to his poison.
On one such fullmoon night he kills menaka and Raju gets suspiciuos about this, as he doesn’t see any marks of snake bite on her body.

A young teacher comes to that village and becomes naagulu’s victim. Raju investigates with the help of film in her camera and finds out that...