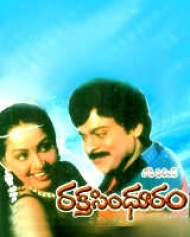 A | Action Drama
Release Date : 24 Aug 1985
Cast : Chiranjeevi, Radha
Director : Kodandarami Reddy
Synopsis
Raktha Sindhuram is action drama based movie in which, Chiranjeevi played dual role as jailer and khaidi. Gopi(Chiranjeevi) is a conscientious sub jailor. One fine day he is tricked by Rekha (Radha) who had already fooled police officers thrice.
Rekha thinks that it was easy to fool police officers, but with an intelligent trick gopi wins the love of Rekha.
meanwhile, Gandragoddali (Chiranjeevi) was sentenced to be hanged for murder.
He meets gopi in jail and asks Gopi to go to his village and save a bonded labour from the clutches of the money lender without causing any harm to the money lender.
But, Gopi had to kill the money lender to free the bonded labour. Now,Gandrogoddali argues in court that he had done the same thing as Gopi and if gopi is free then he has...