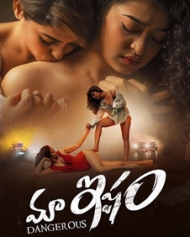 Dangerous is India's first lesbian crime action film directed by Ram Gopal Varma. The movie casts Apsara Rani and Naina Ganguly in the main lead roles. Dangerous is a darkly passionate high intense lesbian love story between two women Apsara Rani and Naina Ganguly.
Story
Dangerous, two women who have had bad experiences with men fall in love passionately with each other after some bad experiences. An explosive climax occurs as they violently fight the men to protect their love.
Release Date
Dangerous movie released in theaters on May 6, 2022, and re-released once again on December 9th in theaters.
Controversy
Producer Natti Kranthi filed a case against Ram Gopal Varma for not paying the dues for a loan taken from him. As a result of the judge's order, RGV Company not be allowed Maa Ishtam (Dangerous) to release in all language versions.