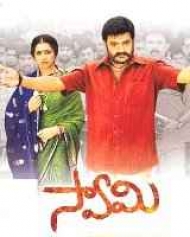 U/A | Action Drama
Release Date : 16 Jul 2004
Cast : Nandamuri Harikrishna, Meena
Director : V.R.Pratap
Synopsis
Swamy is an Action Sentiment based movie. In which, Swamy (Hari Krishna) is a good-hearted rice mill owner in a remote village. He has twin sisters called Seeta and Geeta (Uma). They secure first rank in EAMCET examination and join in a medical college in a city. There is a womanizer medico student called Anand (Rajiv Kanakala) who traps these twins.

He has sex with each one of the twins without the knowledge of others in a couple of carefully planned endeavors. When one of these twins becomes pregnant, he kills them both with the help of his father and uncle.

Swamy comes to city in search of his sisters. He finds the fact out. The rest of the story is all about how he eliminates the bad guys who were involved in the murder of his sisters.