Ram Gopal Varma's next film Disha Encounter's trailer finally released today and as expected, it's a hard-hitting synopsis of the horrifying incident that happened in 2019. For the unversed, the film is based on 2019 Hyderabad gang rape case, in which a female veterinary doctor was raped and killed by four men. The accused were later killed by Telangana police in an encounter.


RGV shared the trailer on his Twitter handle and wrote, "Here is the trailer of DISHA ENCOUNTER based on the 2019 horrific gang rape, killing and burning of a young woman in Hyderabad #DishaEncounter @anuragkancharla @karuna_Natti."

See tweet here
The trailer gives a short synopsis of the horrifying incident happened on November 26, 2019. Director Anand Chandra has shown how the victim was trapped by the four men to destroy her life. Disha Encounter trailer indeed gives goosebumps and fans can't miss the film, which is releasing on November 26, 2020.

The film stars Sonia Akula as the female lead. In the latest tweet, RGV revealed that Sonia is the founder of an NGO AASA (Action Aid for Societal Advancement). She is notably playing the victim in Disha Encounter.


Earlier, Ram Gopal Varma had shared the first poster of Disha Encounter on Twitter. While mentioning about the incident, RGV wrote, "DISHA gang rape and murder on NOVEMBER 26th 2019 shocked the whole country when 4 guys in a Lorry targeted a Scooty driving young woman and brutalised her, crossing the upper limits in crime history of India. 1st look poster releasing at 11 AM ..Film releasing NOVEMBER 26 th 2020."

Also Read : RGV Releases First Look Poster Of His Next Film Disha Encounter Based On Hyderabad Gang Rape Case
Disha Encounter is produced by Anurag Kancharla and it is likely to get released on RGV Theatre. 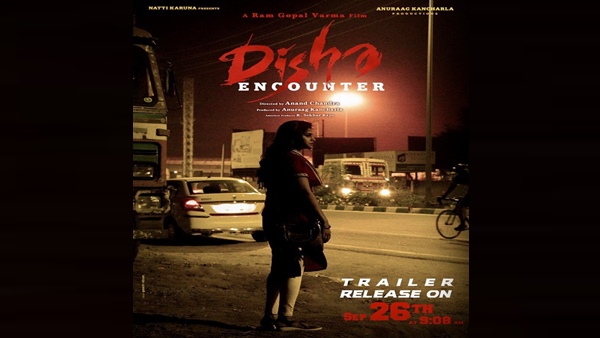 Also Read : Ram Gopal Varma's Disha Encounter's Trailer To Be Out On September 26