Actor Nithiin got married to his ladylove Shalini on July 26 (Sunday) in Hyderabad, in the presence of close family members and friends. The grand wedding of Tollywood's newly married couple took place at Taj Falaknuma Palace. The photos of Nithiin and Shalini are all over the internet now and his fans are extremely happy to see the duo as husband and wife.


Nithiin and Shalini had a traditional South Indian wedding where they were seen in full ethnic attires. Nithiin wore red sherwani with a layered neckpiece. On the other hand, the bride Shalini stole the limelight with her traditional Kanchipuram silk sari and matching diamond jewellery.
The wedding pictures of Nithiin and Shalini have gone viral on the internet and fans can't stop gushing over their royal couple look. In the photos, the couple can be seen exchanging vows and Nithiin tying the thalimala (mangalsutra) around his love Shalini's neck. The guests are also seen blessing the couple by throwing flower petals as they tie the knot. They are just looking amazing together!
For those who are unversed, Nithiin and Shalini were supposed to get married in mid-April in Dubai. But due to the Coronavirus outbreak, they had to cancel their destination wedding. Hence, like many South celebs, Nithiin and Shalini opted for a low-key affair owing to the guidelines issued by the government of Indian in wake of the Coronavirus pandemic.
On a related note, Nithiin will next be seen opposite Keerthy Suresh in Rang De. The actor is also playing the lead role in Telugu remake of Hindi blockbuster film, Andhadhun starring Tabu, Ayushnmann Khurrana and Radhika Apte in the lead role. 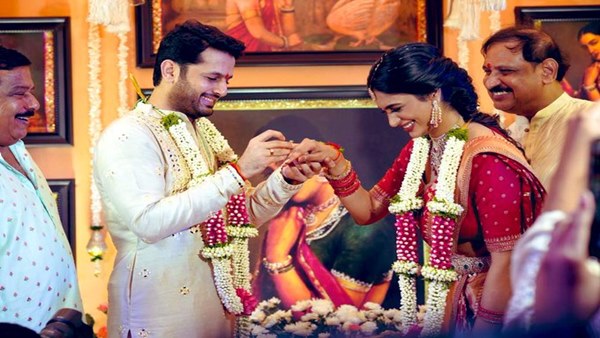 Also Read : Nithiin Gets Engaged To His Ladylove Shalini!