After the success of Baahubali, Rana Daggubati is now considered as one of the biggest stars in Tollywood. Hence, the makers of his next Virata Parvam have decided to release the film only in theatres. Well, amid the trend of releasing films on OTT platform due to the Coronavirus pandemic, director Venu Udugula confirmed that he will release Virata Parvam in cinema halls only.

While confirming the same to Telugu Cinema, the director of Rana Daggubati-starrer said, "We will wait for any number of months but it will only release in the theatres first." For the unversed, the Baahubali star shares good relations with video streaming app, Netflix.


Earlier, Rana Daggubati's production venture Krishna and His Leela starring Siddu Jonnalagadda, Shraddha Srinath, Seerat Kapoor and Shalini Vadnikatti in key roles, was released on Netflix on June 25, 2020. Interestingly, the film had got a solid response from the masses. Hence, Netflix showed interest in buying the rights of Virata Parvam's direct digital release. But, director Venu Udugula rejected the offer.

Talking about Virata Parvam, Rana Daggubati will be playing the role of a Naxalite in the period drama. Sai Pallavi is playing Rana's love interest, while Priyamani and Nandita Das will be featured in crucial roles. The makers have completed 50 per cent of the shoot and are planning to resume work in November with Rana.

Also Read : 5 Years Of Baahubali: The Beginning: Interesting Stories Behind The Prabhas Starrer Are Unmissable!
On a related note, Rana Daggubati's next trilingual film, Haathi Mere Saathi (Hindi), Aranya (Telugu) and Kaadan (Tamil) is directed by Prabhu Solomon. It also stars Vishnu Vishal, Pulkit Samrat, Zoya Hussain, Shriya Pilgaonkar and many others in key roles. The film was earlier scheduled to release on April 2, 2020, but due to the Coronavirus spread, the makers kept it on hold. 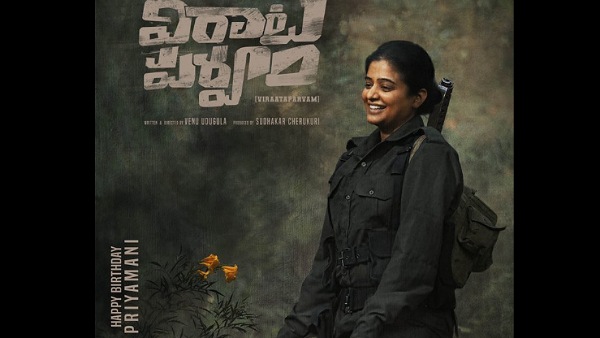