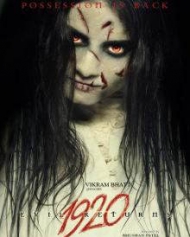 Horror
Release Date : 02 Nov 2012
Cast : Aftab Shivdasani, Tia Bajpai
Director : Bhusan Patel
Synopsis
1920: Evil Returns is a supernatural thriller and is the sequel to 2008 film 1920, which revolves around Jaidev Varma (Aftab Shivdasani), a famous poet who lives the life of a loner as he is unable to meet the love of his life.

He stays with his sister Karuna (Vidya Malvade) who is his support system until he meets Smruti (Tia Bajpai), whom he finds near the lake under mysterious circumstances.

Jaidev brings her home and takes care of her against the wishes of his sister, who doesn’t want Smruti to stay as she senses something wrong with her. During the course of time, Jaidev finds out that Smruti has lost her memory and does not remember anything from her past life except for his poems.

Jaidev decides to take Smruti to Shimla to get her treated...