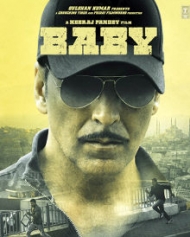 Baby movie is said to have heavy duty and will showcase high octane and adrenaline pumping speed action sequences!

Danny Denzongpa as 'Firoz' - the master strategist and chief of the undercover unit. The film has been shot in the beautiful locales of Istanbul, Kathmandu, Abu Dhabi and some parts of India.

Story in detail:
Ajay is one such officer who is...