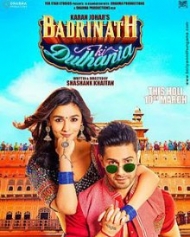 The movie is all about a carefree guy Badrinath Bansa(Varun), who falls in love with Vaidehi(Alia) at the very first sight. Vaidehi and Badrinath have opposite ideologies. This leads to a clash between them and finally Badri lands in trouble.

Badrinath Ki Dulhania is produced by Karan Johar under the banner Dharma Productions.

The music for the movie is composed by Amaal Mallik, Tanishk Bagchi and Akhil Sachdeva while the lyrics were penned by Shabbir Ahmed, Kumaar, Akhil Sachdeva, Indeevar...