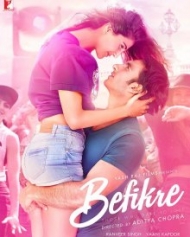 Aditya Chopra is returning to film direction after seven years with ‘Befikre’ — and he chose his father and veteran film-maker Yash Chopra’s 83rd birth anniversary on September 27, (2015) to make a formal announcement about this project.

The film’s tagline reads – “Those who dare to love”, indicating that love will be a core element in Aditya’s new film.

The movie is all about...