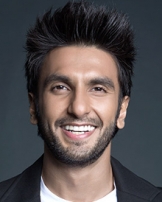 Ranveer was born as Ranveer Bhavnani in Mumbai, 06th July,1985. He did his early college in H.R. College of Commerce and Economics, Mumbai and went to United states to pursue a Bachelor of Arts degree in Bloomington's Indiana University. Ranveer Singh made his debut in the Bollywood Film Industry in 2010. He acquired a lead role in a Yash Raj venture, Band Baja Baaraat and has become one the most promising fresh faces of Bollywood

Ranveer always wanted to be an actor, from his childhood days, and therefore participated in plays and debates in school. “I was a very filmy kid. I used to watch a lot of TV and get very influenced by Bollywood", he recollects. However, when he joined junior college in Mumbai, Ranveeer's hope of becoming an actor dwindled a little and then he realized that getting a break into the industry was not an easy job. Only the people with some Bollywood background support got an opportunity in Tinsle Town. So, he began focusing on his second passion - creative writing - and moved to the United States to pursue his bachelor of arts degree from Indiana University.

He married his co-star Deepika Padukone on November 14, 2018, at Lake Como, Italy, in a traditional Konkani & Sindhi ceremony.

However even in the states Ranveer pursue  acting classes besides his studies. He took up theater as his minor field in College and after completing his studies came back to Mumbai on 2007. He worked for a few years in Advertising industry as a copy writer before he started working as an assistant director. He left the work as an assistant director and took up acting seriously and started giving his portfolios to directors. He felt that his fresh face would work and will bag him a lead role. He refused offers from television soaps and music videos. He only concentrated on his acting career in Bollywood. Ranveer would go to the producers himself and ask for work after showing his portfolio. He did all kinds of auditions and would get a minor roles once in four or five months. He found this very discouraging and would often rethink about his passion for acting.

It was only in January 2010 that Ranveer was called for an audition with Yash Raj Films (YRF). They told him that they were looking for a lead role in their film Band Baaja Baaraat. He went for the audition where he was asked to perform two scenes. Aditya Chopra, the vice president of Yash Raj films was very impressed by his acting skills. He decided to give the role of Bitto Sharma to Ranveer. After two weeks Ranveer Singh was finalized for the lead role in the romantic comedy delete Band Baaja Baaraat  opposite the actress Anushka Sharma.

Ranveer won many awards as a debutant in the Film industry. Including a Filmfare award for a best Debut male at the 56th Filmfare Awards.

He has now signed his second film under Yash Raj banner 'Ladies vs Ricky Bahl' which (is) slated to release in December this year. Ranveer plays a smooth and charming conman, who cons women for a living before meeting his match. The film also stars Anushka Sharma, Parineeti Chopra, Dipannita Sharma and Aditi Sharma.