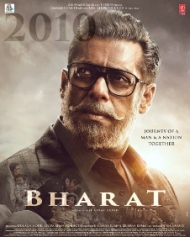 Bharat is a 2019 Bollywood action-thriller, written and directed by Ali Abbas Zafar. Bharat is produced by Atul Agnihotri, Alvira Khan Agnihotri, Bhushan Kumar, Krishan Kumar and Nikhil Namit under the banner Reel Life Productions, Salman Khan Films and T-Series Pvt.Ltd, and the movie is distributed by AA Films Pvt.Ltd. The movie stars Salman Khan, Katrina Kaif, Tabu and Disha Patani in the lead roles. Bharat is an official remake of 2014 South Korean film Ode to My Father, directed by Yoon Je-kyoon.
The movie portrays the journey of protagonist Bharat (Salman Khan) from the age of 18 to 70. The trailer of the movie was released on April 22, which was a winner among the fans. The movie has its soundtrack composed by Vishal Dadlani and Shekhar Ravjiani to the lines of Irshad Kamil.
To begin with, we are drawn into Bharat's life as a kid. The 1947 Indo-Pak partition turns his life upside down when his father, a railway station master and his sister get separated from them. As a promise to his father, Bharat takes it upon himself to look after his mother and his siblings hoping that their family would reunite someday. Soon, he befriends an orphan Vilayati Khan (Sunil Grover) and the two become as thick as thieves. To make their both ends meet, Bharat and Vilayati take up risky jobs which include working in a circus, in the old mines in the Middle East and then a stint in the Merchant Navy. Bharat also fells in love with a feisty girl Kumud (Katrina Kaif) who wears her heart on her sleeve.
The film revolves around Bharat's journey along with that of the nation in a span of over six decades. Ali perfectly uses the iconic Indian historic moments like Jawaharlal Nehru's demise, India's 1983 World Cup Win and Shahrukh Khan's era in Bollywood as a time-frame device in his story-telling.
Marcin Laskawiec has wielded the camera for Bharat. The movie will hit the big screens on June 5 as a Ramadan treat. Bharat was shot extensively in Abu Dhabi, Spain, Malta, Punjab and Delhi.