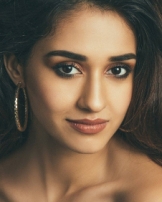 Disha Patani is an Indian film actress, who predominantly appears in Hindi and Telugu films. Disha made her acting debut in Puri Jagannadh's Telugu film Loafer. Disha got her commercial break with Neeraj Pandey's M.S. Dhoni: The Untold Story, where she played the role of Priyanka Jha, the girlfriend of Mahendra Singh Dhoni (cricketer) who died in a car accident. She acted alongside Salman Khan in Bharat movie, she considers herself so lucky to bag a big film like Bharat so early in her career.