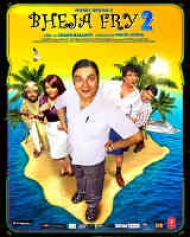 The movie is about Bhushan (played by Vinay Pathak) who is a kind-hearted, childlike chunky tax inspector and he is going to fulfil his long dream of becoming a singer.

To fulfill his his dream he enters a Game show, hoping to win a cash prize with which he can make his very own music album. Ultimately, after struggling, Buusan wins the competiotion and get a free stay on a cruise ship.

On the cruise he meets Ajit Talwar (played by Kay Kay Menon), a businessman who is hiding on the cruise ship from the income tax department. M T Shekharan (played by Suresh Menon), who is trying to unearth the identity of a con artist who has...