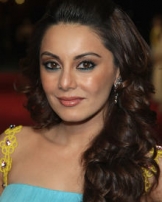 Minissha Lamba is an Indian actress who acts in Bollywood films.

Minissha was born into a Hindu family of Jat ethnicity of Lamba Jat clan. Growing up, her father was in the hospitality business and this gave Lamba the opportunity to travel around the country and meet many people. She can converse in Hindi, Punjabi, English and French fluently.

Lamba's long-term ambition was to become a journalist. While studying for a degree in Delhi, Lamba pursued modelling as a hobby and soon became a well-placed model in the Indian modelling industry. Examples of Lamba's early modelling work include several television commercials for companies such as LG, Sony, Cadbury, Hajmola, Airtel, Sunsilk, and also others.

She has also done a music video (Tera Suroor) for the hit music album Aap Ka Suroor by Himesh Reshammiya.

She did her schooling from Sherwood Hall and later on moved to Chettinad Vidyashram, both in Chennai. In 2004, she majored in English with honours from Miranda House, University of Delhi.

Her first movie "Yahaan", which was directed by Shoojit Sircar was released in 2005. Critics praised the movie citing Lamba's performance as one of the highlights.

In 2008, she acted in Siddharth Anand's film Bachna Ae Haseeno which starred Bipasha Basu, Deepika Padukone along with Ranbir Kapoor in the lead roles. This movie was produced by Yashraj Films.

Next, she featured in a Shyam Benegal film. It is a film about a father-daughter relationship starring Boman Irani as her father. Well Done Abba was highly acclaimed at the Cannes Film Festival, especially Minissha Lamba's Performance.

Next, she starred in a movie series called “MYSTICISM”. Its 8 versions were directed by 4 different directors including Soham Shah & Sanjay Gadhvi.