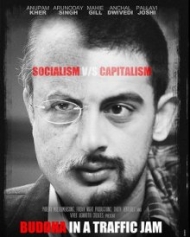 Buddha In A Traffic Jam

2 hrs 1 mins | Thriller
Release Date : 13 May 2016
Cast : Anupam Kher, Arunoday Singh
Director : Vivek Agnihotri
Synopsis
Buddha In A Traffic Jam movie is an autobiographical film based on it's writer & director Vivek Agnihotri's life. Based on true life incidents, it's treatment is that of a new age political drama with an unique chapter wise approach to relevant topics leading to its climax.

Story in detail:
Vikram Pandit (Arunoday Singh) is a happy-go-lucky management student from a top Business School of India. He becomes an overnight sensation after a successful Social-Media campaign against the radical fundamentalism of moral policing in India.

Little did Vikram know that he was about to become a part of a plot that would risk his life and the nation. He gets entangled between two facets of India – Socialism and Capitalism, both of which are deeply rooted in...