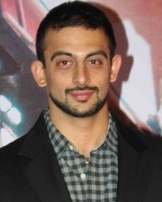 Arunoday Singh is an Indian film actor who is the grandson of late Indian politician, Arjun Singh, former Chief minister and union minister, his father, Ajay Singh "Rahul" is the leader of opposition of Madhya Pradesh state assembly.

He is an alumnus of Brandeis University. He did his schooling at a boarding school at Kodaikanal, where he performed in school plays. According to him, it was after watching actor Marlon Brando in On the Waterfront (1954) that he decided to become an actor.

After his graduation, he did a few courses in the New York Film Academy, and thereafter enrolled in the Acting Studio in New York, during the period he also performed in plays.

After finishing his studies he started giving auditions, and finally made his debut with Sikandar (2009), directed by Piyush Jha, playing a Kashmiri terrorist. His second film was Anil Kapoor's home production Aisha (2010), an adaptation of the novel, Emma by Jane Austen, with Sonam Kapoor.

Also in the same year, he appeared in 'Vinay Shukla's take on Gender and sexuality in Mirch through a collage of five stories, with Raima Sen and Konkana Sharma, where he played the central character of a struggling film director.

In 2011, he acted along side Irrfan Khan and Aditi Rao Hydari, another newcomer in Sudhir Mishra's Yeh Saali Zindagi (2011). His performance earned him a nomination for Best Actor in a Supporting Role at the 18th Screen Awards.