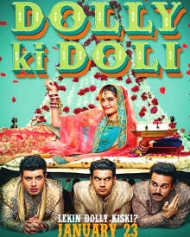 Dolly Ki Doli movie is a woman centric quirky drama where Sonam Kapoor plays a bindaas North Indian girl Dolly and will be accompanied by three other male co-stars. The movie centres around different weddings where the bride, Dolly, a young con marries men from different religions and runs away with their wealth.

Story in detail:
Dolly Ki Doli is the story of a girl, dolly who fakes marriages in an original style and runs away stealing all the precious belongings of the groom and his family. The modus operandi is as follows. Dolly's fake brother, Raju identifies prospective grooms.

Then Dolly makes these men fall in love with her. In return, these prospective grooms are ready to do anything for Dolly including going against their parents' wishes to marry Dolly.

Rare Photos of Dolly Ki Doli
Once married, on the night of the 'suhagraat' Dolly makes them drink 'drugged' milk making them unconscious after which Dolly along with her gang wipes the house clean of all the valuables.

On the other side of the law is Robin Singh (Pulkrit Samrat),  who is assigned to ferret out the con-team that works and succeeds in these heists.