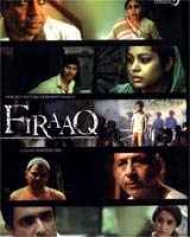 U/A | Drama
Release Date : 20 Mar 2009
Cast : Naseeruddin Shah, Paresh Rawal
Director : Nandita Das
Synopsis
Firaaq is an Urdu word that means both separation and quest. The film is a work of fiction, based on a thousand stories.
The story is set over a 24 hour period, one month after a carriage that took place in Gujarat, India, in 2002. It traces the emotional journeys of ordinary people some who were victims, some perpetrators and some who chose to watch silently. As an ensemble film, it follows multiple narratives that are at times interconnected and at times discreet, yet all are united by their spatial and emotional context