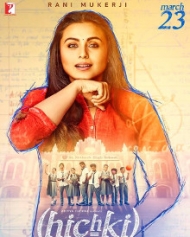 The movie depicts the story Naina Mathur, who has Tourette's syndrome (neuropsychiatric disorder). After several interviews and numerous rejections, finally she gets the job as a teacher. How she turns her biggest weakness into her biggest strength forms the plot of Hichki.

The music of Hichki is composed by Jasleen Royal for the lines of Raj...