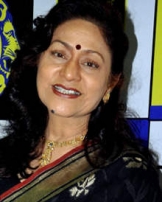 Aruna Irani is an Indian actress of mixed Irani Zoroastrian and Hindu background. An accomplished actress and dancer of her time, Aruna Irani has acted in about 300 movies, with many memorable acting performances to her credit. Irani is the sister of film-maker Indra Kumar. She is married to film director Kuku Kohli.

By that time, however, she was emotionally involved with Mehmood and did not focus fully on her career. Their relationship also ruined the chances of her getting the heroine's roles. Yet, Mehmood gave her lead roles opposite the likes of Amitabh Bachchan and Vinod Mehra in the films that he made: Bombay To Goa (1972), Garam Masala (1972), and Do Phool (1973).

The success as a heroine still eluded her, and ironically, the newer actors and actresses who she supported became stars while acting with her: Jeetendra in Farz (1967), Rishi Kapoor and Dimple Kapadia in Bobby (1973), Jayaprada in Sargam (1979), Kumar Gaurav in Love Story (1981), and Sanjay Dutt in Rocky (1981). She ended up doing vampish and supporting roles, mainly because her memorable performance in Caravan had already typecast her in such roles.

To her credit, however, Aruna Irani seriously took each role and delivered memorable performances, thus making herself very dear to the filmmakers and creating a niche for herself. No other actress of her time could have done full justice to her role of a seductress out to rob the teenage hero Rishi Kapoor off his innocence in Bobby (1973).

She finally won her first Filmfare Best Supporting Actress Award for Pet Pyaar Aur Paap (1984). In the late 1980s and 1990s she switched to playing motherly roles, notably in Beta (1992) for which she won her second Filmfare Best Supporting Actress Award. She also got very famous acting in many Gujarati films and some way changed the trend and played the main protagonist in many films.