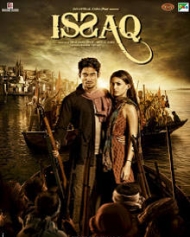 Drama
Release Date : 26 Jul 2013
Cast : Prateik Babbar, Amyra Dastur
Director : Manish Tiwary
Synopsis
Isaaq movie is a contemporary adaptation of Romio and Juliet set in UP heartland in one of the oldest cities in the world varanasi.

In this original Indian adaptation of William Shakespeare's Romeo & Juliet directed by Manish Tiwary, we see the story transposed to Banaras and its neigbouring areas that are witness to violence unleashed by sand mafia controlled by urban elite and equally violent retaliation by Naxalite armies.

The sand mafia is run by two influential Banarasi families, Kashyaps and Mishras, who are at brutal feud with each other. Kashyap has an 18-year old, pretty and innocent daughter Bachchi from his first wife, Bachchi's role is played by Amyra Dastur who marks her debut in this film.