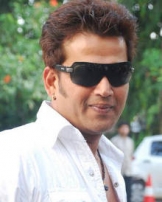 Ravi Kishan's most recent, and successful, shot to popularity was his participation in Bigg Boss, the Indian version of Big Brother. There, not only did he make his name known outside the Bhojpuri community in a big way, but also, almost became a household name. He belongs to Jaunpur .He is married to Priti and 3 daughters and a son

He has also starred in a number of commercially successful Bhojpuri films, frequently starring opposite Nagma. He has been quoted by the BBC as saying "Bhojpuri cinema is like home-cooked food."

He is now hosting a popular television show Bathroom Singer. He is hosting a television show in zee TV with the name ek se badhkar ek - Jalwe sitaron ke. A total of 16 stars will participate in this show in a total of 8 jodis. Each pair will comprise one dancer and one singer. These teams will then appeal to the viewers for votes in order to win the coveted title of "Sabse Badkar Jodi".

Big Boss
It is rumored that Ravi is the highest paid star on Bigg Boss, but Ravi said in one of the interviews that he is in it to de-toxicate himself, as he has been working a lot and also has some problems at personal front in recent past. So, he said, he would use his time at Bigg Boss' house to gain control of himself in more than one way. In the house there were rumors of Ravi having an affair with his house mate Carol.

At Bigg Boss, Ravi lived a non-bitching, non-conspiring, in-the-face life - much to the appreciation of the masses. May be that is the reason he was among the last three of the housemates, before the public crowned Rahul Roy the winner.

Again, Rahul and Ravi became good friends as housemates, and most of the people give fair bit of credit of Rahul's win to Ravi.

He is also not much appreciated by Hindi speaking viewers of the zee TV due to his hosting style and his usage of the Hindi Language words such as 'adbhoot' and 'babu'.

Ravi Kishan was best friends with Sandeep Rajbhar who always taught him acting. Ravi says that sandeep rajbhar was his role model and a langotiya yaar.