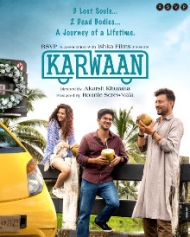 Karwaan is an out-and-out comedy entertainer of Bollywood, which has been directed by Akarsh Khurana. The movie stars Dulquer Salmaan, Irrfan Khan, Mithila Palkar etc., in the lead roles.

The movie marks the Bollywood debut of South star Dulquer Salmaan. Karwaan revolves around three major characters, who embarks on a road trip from Bangalore to Kochi, due to some unforeseen circumstances. How these three characters create problem to others during the journey forms the plot of Karwaan.

Avinash (Dulquer Salmaan) is a dejected soul who is stuck up in a mundane job in an IT firm in Bangalore. Through flashbacks, it's revealed that his heart always beat for photography, a career which his father (Akash Khurana) never approved and brushed off as...