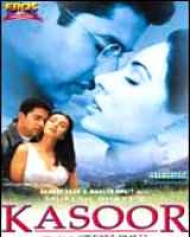 A | Romance Thriller
Release Date : 02 Feb 2001
Cast : Aftab Shivdasani, Lisa Ray
Director : Vikram Bhatt
Synopsis
Kasoor movie is is a suspense thriller about crime, punishment and passion. Shekar Saxena is charged and arrested for the murder of his wife, Priti Saxena. Shekar strongly contends that he is innocent, and that the murder was committed by someone else.

His lawyer, Simraj Bhargav, is sympathetic to his plight, and believes him, successfully defends him and gets him acquitted. After his acquittal, she starts having doubts about his innocence, and must protect herself, before she becomes his next victim.