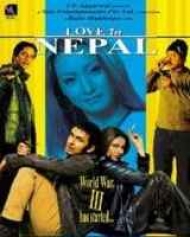 A | Comedy Romance
Release Date : 05 Mar 2004
Cast : Sonu Nigam, Fllora Saini
Director : Rajat Mukherjee
Synopsis
Love in Nepal is romantic comedy movie in which Abby and Maxi are in love and travel for a holiday to Pokhara, Nepal. Once there, Abby meets an attractive young woman named Tanya and both are attracted to each other. Tanya asks a drunken Abby to accompany her to her room, which he does.

The next day Abby wakes up and finds Tanya's body, with her skull virtually crushed, next to him. He runs from the scene, quite certain that he will be blamed for killing her. He confides in Bunty, the local Guide, and Maxi, and both disbelieve him. It is now up to Abby to find out who really killed Tanya, what was the motive for her death, and who wanted him at the scene of the crime.