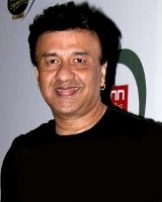 Anu Malik is an Indian singer, music director, actor, director and producer.He is a Indian National award-winning music director, who primarily works in the Hindi film industry. He is the eldest son of renowned music composer and lyricist, Sardar Malik, a Punjabi seer form Kapurthala.

At the age of seven, Anu realized that he could create a tune for any given set of words, anywhere, anytime. He grew up amidst great talents like Sahir Ludhianvi, Raj Kapoor and Raja Mahedi Ali Khan Saheb.

He began his musical journey with Mohan Choti’s film ‘Hunterwali’. He made his mark in the Bollywood film industry with unforgettable music scores in ‘Sohni Mahiwal’, ‘Ek Jaan Hain Hum’, etc. After a period of temporary lull, his career again soared with hit songs.

Anu Malik’s music has crossed all barriers and transcended all regions. He was the music director of films like ‘Border’,’Viraasat’, ‘Baazigar’, ‘Fiza’, ‘Akele Hum Akele Tum’, ‘Filhaal’ and ‘China Gate’. For his sheer versatility, determination, and a never say die spirit, Malik is quite matchless in the Hindi film industry.