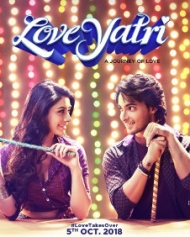 The movie depicts the love story between Sushrut and Michelle, who meet during the festival of Navratri. Eventually, the couple falls in love. How this relationship affects their future forms the rest of the plot of Loveyatri. All the songs of Loveyatri have become an instant hit upon their release.

Sushrut aka 'Susu' (Aayush Sharma) is a 'good-for-nothing' Gujarati lad who is least interested in studies and instead, dreams of opening his own garba academy. Su waat chhe! On the other hand, Michelle aka Manisha (Warina Hussain), a NRI girl based...