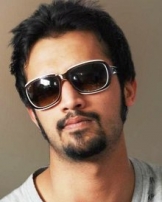 Atif Aslam is a Pakistani pop singer. He was born in Wazirabad and educated in Lahore and Rawalpindi. He is widely recognized in South Asia and has given several hit songs such as Aadat, Woh Lamhe, Tere Bin, Pehli Nazar Mein, Tera Hone Laga Hoon, Tu Jaane Na and Meri Kahani. He is best known for his powerful vocal belting technique.

Atif Aslam was born in Wazirabad, Pakistan. His kindergarten started in Model Town, Lahore at Kimberley Hall School. His first stage manifestation was in a fancy dress show at his school when he was in 1st grade, where he performed as Imran Khan (former captain of the Pakistani Cricket Team). Since then cricket was a passion for him. At that time he did not listen to any particular kind of songs.

At the age of 9, he moved to Rawalpindi where he studied at Saint Paul's Cambridge School. He came back to Lahore in 1995 where he continued his studies in Divisional Public School (DPS), Model Town, Lahore.

He was selected in his school cricket team as a bowler. He cleared his 10th grade at 14 years of age with a distinctive edge that he has always been the youngest boy in the class because of his double promotions while he was in Kimberley Hall.

During this period, he was putting his best efforts into becoming a professional cricketer. He passed out of DPS after completing his school ending matriculation exams. He also played Table Tennis.

He further continued his education at PAF College, Lahore where he completed his F.Sc with the class of 2001. He then did his Bachelors of Computer Science from PCBA/PICS (University of Central Punjab).

He used to sing at the college canteen when his friends urged him to participate in the singing competition on Independence Day celebrations at PAF College Lahore in 1998. He performed there and won the competition. Thereafter, he also won several other college competitions.

He met Goher - a guitarist who would be his future Jal bandmate, at his college. Together, they practiced and started doing mini-concerts for their friends. Atif used to perform on Junoon and Strings songs at these concerts. They started performing at their college, McDonalds, Uncle Bubba's Rabba Dabba and other restaurants. Thus began the original line up of Jal.

Jal recorded the song Aadat at Mekal Hassan's Studio. The song became popular on different musical websites in Pakistan. The song was also being aired on major radio stations of Pakistan like City FM 89, FM 100, Mast FM 103, FM 105, etc. The video for this song was released on ARY Digital and The Musik and then it was played on almost all the channels.

Atif released his first album Jal Pari on 19 July 2004 under Sound Master and IC records. Its promoters declared it to be the best selling album of the year within just 5 months of the release. In the meantime, Atif also cleared his Bachelors in Computer Science (Hons) from the University of Central Punjab. On 14 April 2007, Atif Aslam performed at Royal Albert Hall. His second album, Doorie was released on 22 December 2006.

His next Bollywood venture is Prince in which he has sung four songs (Tere Liye, Aa Bhi Ja Sanam, Kaun Hoon Main and O Mere Khuda). The songs were composed by musician Sachin Gupta, who has had a number of hits with Atif in the past.

After the release of the song Aadat by Jal, there were disputes within the band about Atif's brother being the band's manager. At this point, Atif broke off from the band to do his own solo album. His solo album was released a few weeks before the release of the new Jal's (Goher Mumtaz, Farhan Saeed, Shazi) Aadat.

As both Jal's Aadat and Atif’s album, Jalpari, shared certain tracks (such as Aadat, Wo Lamhey, Rangon Mein and Dil Harey), an unofficial war over rights began between both the groups. Goher Mumtaz sued Atif Aslam for using the name Jal in his album title cunningly (Jal Pari, meaning mermaid).