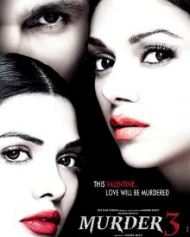 U/A | Thriller
Release Date : 15 Feb 2013
Cast : Randeep Hooda, Aditi Rao Hydari
Director : Vishesh Bhatt
Synopsis
Murder 3 is the sequel to the 2011 film, Murder 2. This is the third installment in the Murder series and is an official Bollywood remake of the Spanish thriller The Hidden Face.

The movie starts with a hot-shot fashion and wildlife photographer Vikram (Randeep Hooda) gets into a relationship with a waitress from a lounge, Nisha (Sara Loren).

She moves in with him in his palatial house outside of the city. The old world house, made decades ago is as beautiful as scary it is.

It holds many secrets which Nisha is soon to unearth; of the life of the man who made it and of Vikram, who is dealing with the mysterious disappearance of his former girlfriend Roshni (Aditi Rao Hydari).