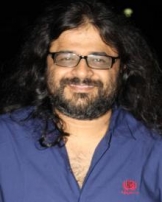 Pritam Chakraborty, better known as Pritam, is a music director and composer from India who is presently based out of Mumbai.

Born in Kolkata, Pritam is the son of Prabodh Chakraborty, who runs a music school for children. Pritam gained his early training in music from his father and learned to play the guitar while still in school.

After completing his schooling at St. James' School and college education at Presidency College, he went to a music school. Pritam joined a Bangla band, Chandrabindoo. Before that he had formed another band with his Presidency batchmates, called "Jotugriher Pakhi". They even had a cassette released to their credit at that time.

Having completed his education, Pritam moved to Mumbai to pursue a career in Bollywood. During his stay in Mumbai, he began composing ad jingles and became friendly with a number of other young men struggling to make it big, like Shantanu Moitra, Rajkumar Hirani, Sanjay Gadhvi, and Chandrajeet Ganguly, also known as Jeet, who played the guitar with Anup Jalota.

Pritam got his first break when Gadhvi was signed on to direct Tere Liye and he, in turn, signed on his friends Jeet and Pritam as music composers. Though the music was well received, the film sank at the box office.

Jeet and Pritam worked together for only one more film, which was Mudda - The Issue, before parting amicably. After the separation, Pritam's career as a solo musician stalled as he composed music for a series of flops like Fun2shh - Dudes In The 10th Century and Agnipankh. The films sank at the box office and with them, Pritam’s music too.

However, in 2004, Pritam composed the music for Sanjay Gadhvi's second film, Dhoom, which was a runaway success. The film did well and the music topped the charts.

Pritam has been accused of plagiarism on several occasions, wherein he has copied the music for a number of his most popular Hindi film songs from various artists from around the world (especially Asia), without giving credit to the original artists themselves. In some cases, he has bought the copyright and given due credit too.

Taiwanese singer Lee-Hom Wang and his record label Sony BMG Music Entertainment Ltd. sued Tips Films, the distributors and rights holders of Race (for which Pritam composed the music), for $320,000 in damages, accusing them of plagiarizing his song Deep in the Bamboo Grove (Chu Lin Shen Chu) into Zara Zara touch me from the film.