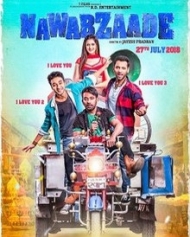 Nawabzaade is a 2018 Bollywood comedy-drama, helmed by Jayesh Pradhan. The movie stars Dharmesh Yelande, Raghav Juyal and Punit Pathak in the lead roles.

Varun Dhawan, Shraddha Kapoor, Badshah and Athiya Shetty are making a special appearance in one of the songs from Nawabzaade. The movie has its cinematography done by Shehnad Jalaal.

The music for Nawabzaade is composed by Gurinder Seagal, Guru Randhawa & Badshah. Overall, the movie has five songs and all the songs have become instant hits upon their release.

Nawabzaade is produced by Lizelle D'souza & Mayur K Barot under the banner T-Films & R D Entertainment. The movie is distributed by AA films throughout the country. The movie will hit the...