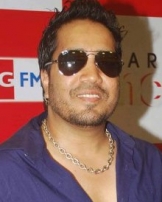 Mika, born as Amrik Singh, is a bhangra / rap indian singer.He is considered to be highly acclaimed punjabi singer.He has done many film songs which include singhh is kinng, mauja hi mauja,guitar.He has also participated in reality show called iss jungle se mujhe bachao.He is also in media due to various controversies.

Family Background
His father Ajmer Singh Chandan is a trained classical musician of the old school. His mother Balbir Kaur was also aware of folk music. He is the youngest brother of the six Mehndi brothers, of whom famous Punjabi singer Daler Mehndi is the oldest.

Career
Mika is a Team Captain, judge, and mentor for STAR Plus's Music Ka Maha Muqqabla for the team Mika's Blasters. He has completed the film titled "Mitti" & composed the music of movie.

Early Years
Mika started learning music from his childhood. He began to play tabla at the age of eight. He started playing harmonium when he was 12 and guitar when he was 14. His career evolved from kirtan singer to bhangra/pop artist. He released his debut album Sawan Mein Lag Gayee Aag in 1998, at the age of 21. Since then Mika had given several hit albums like Ishq Brandy, Something Something, Gabru, and Dunali.

Live concerts
Mika is also known for his large audiences at shows, once even as large as 60,000 people. Mika is also set to release his 5th studio album in 2008 which is highly anticipated due to the involvement of Vikas Kohli and the work done at the Fatlabs studio in Canada.