X
#Filmibeat: Best Of 2018. Hurry up & vote!
Vote Now!
Home» Bollywood»Movies»Once Upon A Time In Mumbai 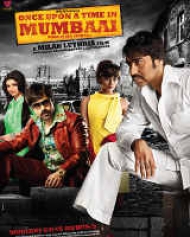 Once Upon A Time In Mumbai

U/A | Crime
Release Date : 30 Jul 2010
Cast : Ajay Devgn, Emraan Hashmi
Director : Milan Luthria
Synopsis
Once Upon a Time in Mumbaai movie cover the entire growth of the Mumbai underworld, from crime and smuggling in its early stages through its connection with international terrorism in recent times. It is based on actual happenings.

The film, set primarily in 1970 Mumbai, follows the rise of Sultan (Ajay Devgn), and his eventual fall, when his protégé Shoaib (Emraan Hashmi), challenges his supremacy, and usurps power to rule the murky underbelly of Mumbai. It is believed to be loosely based on the life of Haji Mastan and Dawood Ibrahim.

The film is treated in an avante garde fashion, bursting with color, underlining the style of the 70s and 80s